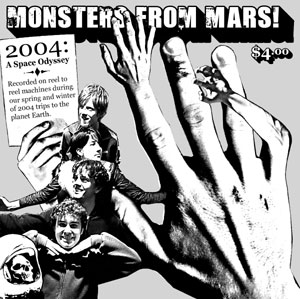 Filmed on super 8 film in a day or two. Thor and Scott came up with the idea. Scott did the editting. I think this was 2004.


We shot this at the end of 2007. We knew of an apartment that was vacant, so we used it as our "studio." We went to the beach and got some sea weed and to a party store for the tridents and green plastic table clothes we used as our greenscreen. Thor directed and composited (with no prior experience).

It's been just over ten years since Scott and I while still in high school started Monsters From Mars in my parents' garage. We were heavily influenced by 60s surf rock recordings by the likes of Dick Dale and 90s surf-influenced bands like Man...or Astro-Man? and Shadowy Men on a Shadowy Planet. (Little did we realize that the 90s were over and we'd soon be regretting our choice of name.)

In addition to the spring reverb surf rock, we mixed in elements of horror and garage rock. We played loud, and we played fast. Paul added a progressive element with his songwriting. Though the band started out performing as a trio, through the years it grew to an six-piece. Scott got an "as-is" Farfisa compact on ebay and it worked more or less perfectly. He also started playing some theremin. We added some more keyboards, synths, melloton sounds. Baritone guitar. And then Bob Stencil, minor internet celebrity, contributed his MCing, crooning, and story-telling skills as well.

We've taken our show up and down the California coast. We've shared the stage with Thee Oh Sees, xbxrx, Train Vs Auto, The Altaire 6, Deadbolt, Foot Village, FM Bats, The Zookeepers, The Poontang Wranglers, The Pharmacy, Little Teeth, Di Niginum, The Creepy Creeps, The Atoms, Nora Keyes, Coachwhips, Devotchka, Erika Davies, Cash'd Out, The Clamour, Dave Dean's Musical Forklift, Put Down the Science Pole, The Natives, The Widows, Crimson Ghosts, All Leather, The Woolly Bandits (Sky Saxon), Scarlet Symphony, James Rabbit, Elliottfuckingsmith, The Swiss Family Skiers, and a bunch of other bands you haven't heard of or can't remember. We played a lot of all-ages shows, especially in San Diego and Los Angeles. We also played in Tijuanna a few times.

Early on we self-recorded and released a couple DIY CD-R full-lengths. After that Tic Tac Totally put out our 7" "Surfing Through a Creepy Castle." Shortly after that Matt from Tic Tac Totally stole somewhere around $600 from us for T-shirts we paid for and he never printed. Not too long after that he got rich by putting out bands like Wavves, Thomas Function, Jay Reatard, and Lost Sounds. He still hasn't paid us back and doesn't respond to our emails any more. After that we put together a collection of recordings entitled "Atlantis" to accompany our "Atlantis" medallion, designed by Paul.

Things have slowed down the past couple years, as I've been living and traveling far away and devoting more time to my other projects. But now I'm just chilling in San Diego again and so in no time things will be back in full swing.

If you are interested in booking a show with us, please get in touch.

Almost all of these photos are by either Chris Woo or Sean Dejecacion (mouse over a photo for the credits). I think these photos speak to their amazing skills. There are more and I'll put them up as I get around to it.